We were recently asked to address a project suffering the following:

…Well compacted concrete is an inherently water resistant material, and with sufficient depth it can essentially block water out, however concrete structures leak. Why is this? Well one way to think about it is that water penetrates not where the concrete is, but where the concrete ‘isn’t’ (a description I pinched from Bob Cather).

Where might concrete not be, within a concrete structure?  Such positions might include: through cracking, construction/day joints, movement joints or induced crack joints (neither of which are a good idea in a basement), and the focus of the example, which as per the clips above, is the service penetrations.

We were contacted before Christmas by a family suffering at the hands of a problem basement plant/store room, within a new-build property in very wet clay ground, where the structure is formed in reinforced concrete, tanked externally with bitumen sheet membranes (…like a bad penny), then subsequently tanked internally as an attempted remedial measure, this using polymer modified cementitious tanking slurry.

The space continued to suffer ingress and the homeowners were having to manually wet vac up the water following rainfall, sometimes throughout the night, this to prevent the space from flooding, which put plant – ground source heat pump equipment and electrical plant etc., at risk.

While water was moving through the external tanking, structure and internal tanking, a primary point of ingress was at high level service penetrations at the top of the retaining wall, as per the photo below:

The service penetrations were simply not detailed or sealed appropriately, which when combined with site conditions and the absence of any means to limit or prevent pressure externally, resulted in the degree of penetration evident below:

This degree of penetration flooded the space within a matter of hours:

Part of the equation was also a rolled metal duct associated with a ventilation system.  This extended through the retaining wall into the ground externally, then up to above external ground level (see previous photo).  The duct included no specific waterproofing (in any case it was not an appropriate material) and standing water in the ground pressured on the joints in the ducting, then moving into the interior of the pipe and running into the basement within the pipe itself before draining out internally:

The solution involved a combination of approaches.

We excavated externally to expose the service penetrations, this in part because third parties had already applied various tanking materials internally to the majority of pipe penetrations, access was very limited because of the extent of pipe-work, and generally where seeking to block water out, it is easier to achieve this at the positive face (externally), where water pressure is pushing the tanking material on to the substrate upon which it is applied; rather than away from it, which would be the case with internal application.

We did install some localised tanking details internally (where practical), doubling up with external works.  The rolled metal ducting was also replaced with a plastic alternative.

We knew that totally excluding water would be a difficult proposition, in that applying tanking externally working in what would essentially be a muddy hole, would not necessarily provide a perfect barrier to water, and so also proposed an internal cavity drainage waterproofing system, which primarily addressed the floor construction so that we could ensure a dry floor surface, but also with localised membrane wall linings in areas beneath specific service penetrations, or where there was penetration direct through the walls.  While we did not line all walls, the system was configured so that penetration at virtually any position would be collected by the cavity drainage system.

In addition we installed a temporary pump externally to service water collected by the land drain, this to limit pressure upon the service penetrations, until the land drainage aspect could be addressed with a more reliable outlet.  This is a point of interest because the pumps (and our materials generally) are supplied by Newton Waterproofing.  We are told that these pumps, (which we employ within our cavity drainage sump systems dealing with relatively clean water), can be used in a muddy hole in the ground, because this is what they are designed for.

A typical pump would not be expected to last long under such conditions, but this automatic pump has dealt with not insubstantial volumes of water since mid-December 2014.  It is now March and is not planned for removal just yet.  These are not cheap pumps, but you can see why those like us that use them, typically with two in each sump with independent power supplies and battery back-up, are happy to rely on them and issue long term guarantees subject to these systems being appropriately maintained.

In summary then, what should we take away from this?

I would note that land drainage systems are totally reliant on whatever they discharge water into, and if that reaches capacity (soak-aways) or blocks/collapses causing surcharge, then whatever form of barrier tanking/waterproofing system is included must be perfect (free of defects) in order to exclude water when hydrostatic pressure comes to bear.

British Standard 8102 (2009) Code of practice for the protection of below ground structures against water from the ground, section 4.3.2 ‘Defects and remedial measures’, states that designers should assume a risk that defects might be present either via workmanship or the properties of the products employed.

If we have to assume defects – because forming a perfect barrier to exclude water when working in what might be a muddy hole in the ground is unrealistic – then is it worth betting your clients basement / your insurance cover or balance sheet, on the reliability of an external land drainage detail?  I do not think so, and would not do so.

If ever there were an advert for using a specialist waterproofing contractor, taking responsibility for the design (backed by P.I. insurance) AND the installation – providing a single point of responsibility, then this is it.  BS8102 does include a section on ‘Design team’ (4.2) which advises getting a design specialist on board as part of the design team at an early stage, it is beneficial that this is the installing contractor ultimately providing the guarantees.

Finally, a lot of people that I meet with problem basements use the word ‘nightmare’, and while this is typically fair use, particularly where extensive remedial measures are then required, this particular case was certainly a genuine nightmare for the homeowners who deserved a dry basement.  Imagine staying up throughout the night with a wet-vac, protecting your hard earned, then going to work during the day!  I’m just glad that we have been able to resolve this for them.

Received a very nice review on our Google places page (can be viewed by searching Trace Basements on Google maps) from the client:

I cannot recommend Trace Basements highly enough. I had been facing basement problems with water ingress every time it rained. Multiple contractors had attempted to plug the leaks, reline the wall etc all of which works for a little while with recurrence of the problems a short time later. James came in, took a little time to investigate, considered options and explained to us what was required. Both him and the rest of the team were very approachable. The work has been carried out to a very high standard. They went beyond the call of duty to help to the extent that they mobilised immediately to dry out the basement on an occasion where some heavy rain overnight left me with a basement under 2 feet of water. I was away but phone calls/text messages resulted in them coming in, clearing up etc. James even took away some of my electricals to dry off, making sure they worked before bringing it back. All in all, having self built and dealt with a myriad of contractors of multiple trades over the past few years, Trace stands head and shoulders above the rest.

One thought on “Service Penetrations – How Bad Can it Be?” 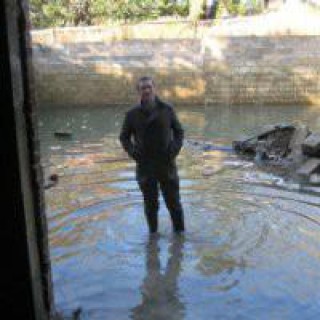